Health, Safety and Security awards : Keolis rewards the commitments of its subsidiaries 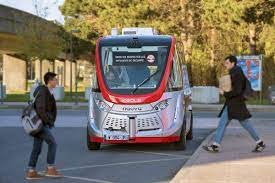 Health, Safety and Security awards : Keolis rewards the commitments of its subsidiaries

After the Safety Week, which was held from 14 to 18 June 2021, Keolis has honored innovative actions developed in the past months by its subsidiaries to improve the health, safety and security of its passengers and collaborators. Beyond these prices rewarding the teams, this first-of-its-kind in the Group enables the company to highlight and share good practices so they can be used in the networks in the 15 countries where Keolis is present.

Awards for the fight against COVID-19

Safety in public transports also involves third parties’ safety (pedestrian, two-wheeled vehicles, drivers) who cross the routes of buses and tramways. After on-site and in the field testing, Keolis Lyon found that rear vision cameras appeared to add real value for drivers thanks to a better visibility of blind spots with unprecedented quality of vision during the day, night and in all types of weather. The SYTRAL was convinced by the demonstration and has decided that every new vehicle will have this type of equipment and that the current vehicles will be retrofitted. The fleet will be entirely equipped within 4 to 5 years. Furthermore, testing of an alerting light device at pedestrian crossway for streetcars will be undertaken in 2021 and 2022.

Thanks to an educational bus tour, Keolis Secteur Languedoc Grands Causses, that operates school transport in the Hérault and the Gard, South of France, raised awareness among more than 1,500 students from six schools about the importance of wearing seatbelts in buses. The bus was installed on a low-boy trailer and recreated hyper-realistic accident simulation conditions thanks to the turning system that allowed the simulator vehicle to be manoeuvred on its side. The accident simulation allowed the students to escape from inside a bus lying on its side featuring luggage which had become obstacles and a roof hatch offering the only way out of the vehicle and familiarised them with the importance of wearing a seatbelt.