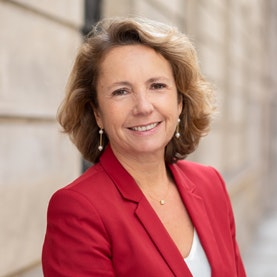 Marie-Ange Debon is a graduate of HEC Paris (1986) and the Ecole Nationale d'Administration - ENA (1989) and held several manager positions in international groups before becoming Keolis Group Executive Chairwoman on 24 August 2020.

In 1998, she joined Thomson Group, now Technicolor, as Deputy Chief Financial Officer and then General Secretary.

She then joined SUEZ Group as General Secretary when it was listed on the stock exchange in 2008. She successively led the international division (€4.6bn turnover in more than 50 countries) and the French division (30,000 employees, €5.8bn turnover), before becoming Deputy Managing Director until March 2020.

Marie-Ange Debon is also a Director of listed companies, Vice-President of MEDEF International and Director of the Jeanne Garnier palliative care facility in Paris.